My most popular post to date has been Businessmen Presidents, in which I debunk the idea that successful businessmen make good presidents by looking at our actual history.   So, along those same lines I offer this infographic comparing stock market performance under Democratic and Republican presidents over the last 24 years. 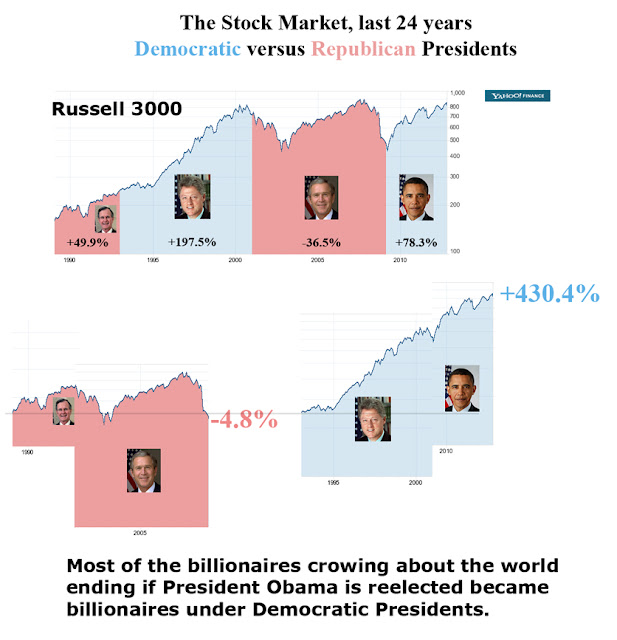 I picked 24 years because it seems fair.  The period covers four presidents, two Republicans and two Democrats.   The parties have been in power 12 years each -- well, almost 12 for the Democrats, as President Obama's first term has a few months left.

I used the Russell 3000.  This is a broad index, covering the 3000 largest publicly-traded stocks, collectively worth 98% of all publicly-traded companies in the United States.   It's a pretty good proxy for investor prosperity.   It includes lots more companies than the S&P 500 or the Dow 30. It's cap-weighted, which means the larger companies count more, in proportion to their market capitalization.   This is the right way to go to find out what happens to the average dollar invested in the stock market.   For the returns shown as percentages I used the monthly RUA (Russell 3000) series, so I started each president at the end of the January in which they took office.

When you do this sort of thing with jobs, there's a fight about when to start counting each new president, because it takes a while for the new administrations policies to have an effect.   With the stock market there's no inherent lag, so I just used as close to the start of the term as I could get.   I suppose you could argue that you should start from election day, or even before, when the winner is first apparent.   However that would credit bad news to a president-elect who had nothing to do with it and who is powerless to do anything about it, so I didn't think it was right to take that route.

I used Yahoo finance for the graph because it had the series going back far enough, and it was able to do a logarithmic scale for the Y axis, which your math friends will tell you is necessary to make the "stacking up" metaphor work properly.   The percentages are combined by compounding [(1+p1)*(1+p2) - 1] which makes more sense than simple addition.


It's not like I counted billionaires.   It's just that the way people become billionaires is mostly by owning lots of stock that goes up in price.   As the graphic shows, this happened mostly under Democrats in the last 24 years.

I'll admit I even surprised myself when I worked out the numbers and the difference was this stark. Over the last 24 years,  the U.S. stock market lost 4.8% under 12 years of Republican presidents, while it gained 430.4% under almost 12 years of Democratic presidents.

Why aren't the Democrats telling everyone?

I was inspired to make this after my brother-in-law sent me a story about Bernie Marcus, the billionaire founder of Home Depot, telling everyone the world is going to end if Obama gets reelected.    There's a youtube ad that's getting some attention.   It's related to the rather despicable trend of Republican CEOs threatening their workers with dire consequences if Democrats are elected in November.

So, I first worked this up for Home Depot before I did the picture above. 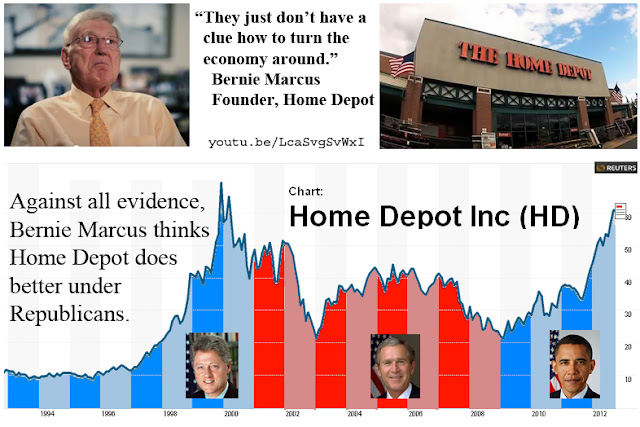 A commenter on the Patch alerted me to a Bloomberg article from February that make a similar point to my stock market chart.  The Bloomberg article uses the more narrow S&P 500 index and goes all the way back to JFK.  It says:

Posted by ORCSDcleanslate at Monday, October 29, 2012