While we're waiting for the outcome of the presidential race let's reflect on the magnitude of the disaster the election was to New Hampshire Democrats at the state level.

It's November 5, 2020, around 11 am.  We New Hampshire Democrats are biting our nails awaiting the outcome at the Presidential level.  We're disappointed the country did not deliver the clear repudiation of Donald Trump and his enablers that pollsters led us to believe was coming.   The US Senate seems likely to remain in Republican / Mitch McConnell's control. The US House remains in Democratic control, though with a predicted slimmer majority.

At the national level, NH Democrats did their job.  We gave Joe Biden and Kamala Harris NH's 4 electoral votes.  At this point it's clear every electoral vote counts in this very close election, so we should be proud of that.  We also reelected Democrat Jeanne Shaheen to the US Senate and Democrats Chris Pappas and Annie Kuster to the US House of Representatives. 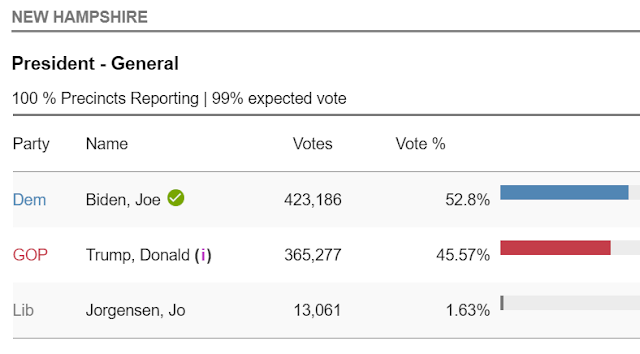 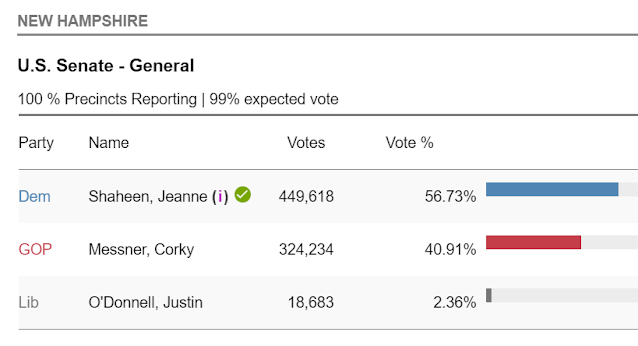 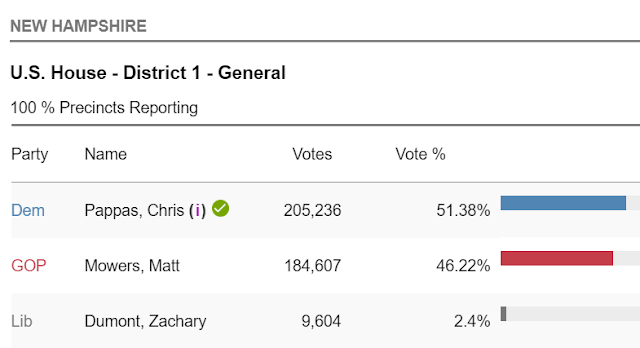 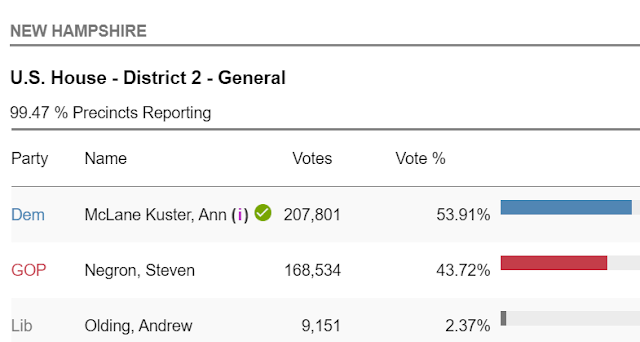 The rosy story of NH Democrats at the national level is a marked contrast to their abysmal performance at the state level.   As expected, Gov. Sununu soundly beat Dan Feltes.  Less expected was the total loss of the Executive Council, State Senate and State House.
Democrats currently control the Executive Council 3:2 (I'll consistently write D:R).  In January control will be 1:4, a flip to the Republicans. The NH Senate, 14:10 D flips to 10:14, with still some uncertainty at this time.  The NH House, currently 230:137 is predicted 188:212, also with uncertainty.
Among the obvious awful consequences of total Republican control at the state level is that redistricting following the 2020 census will be totally partisan for another decade, and who knows how long after that.
I don't know why the Democrats suffered this awful defeat, though I do know that every time I touched YouTube there was an ad telling me how Feltes or some other Democrat was proposing an income tax.  I didn't see any countering by our side.

Let's do the Executive Council:

Democratic incumbents Michael Cryans and Debora Pignatelli appear defeated in EC1 and EC5, with local favorite Mindi Messmer failing to capture EC3 and Mark Mackenzie failing to beat the incumbent in EC4.
I'm going to continue with snapshots of the results for the races on ballot in Lee, NH.  Congratulations to our new Democratic State Senator Rebecca Perkins Kwoka and our reelected State Representatives Jeffery Salloway and Amanda Gourge.

Nice victory by Rebecca Kwoka taking over Martha Fuller Clark's seat on this otherwise awful night for the D team.

This is of interest to our Oyster River neighbors in Lee and Madbury. I'm still surprised Wayne Burton lost the primary. 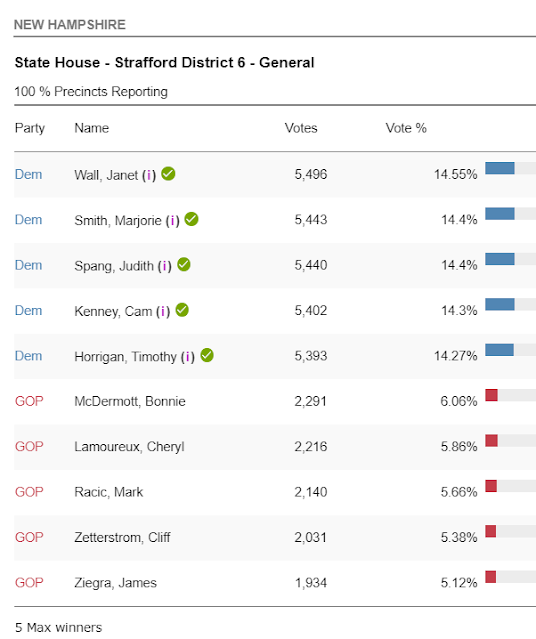 Looks good for him.  I didn't see other Strafford County races on the site; perhaps the rest were uncontested.
Here are the results from the town of Lee itself: 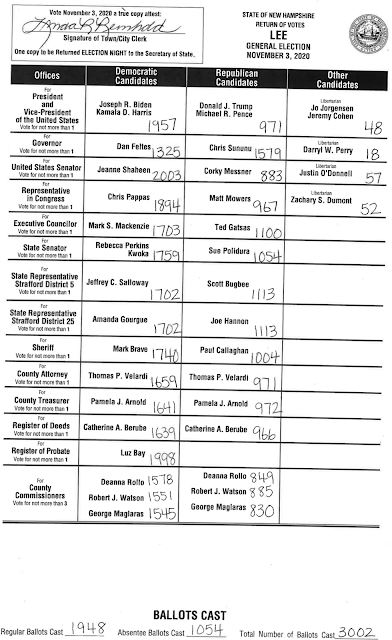 Posted by ORCSDcleanslate at Thursday, November 05, 2020