Breaking News 11/3/2012:   The Associated Press reports there's no evidence that anyone got a job at a Guinta job fair.   NotIntaGuinta.org readers knew this a month ago because they read the following post.     Be sure to notice the lame dodge from Guinta - he won't tell us names because he's respecting the privacy of the newly hired.   Maybe we need a school to make congressmen better liars.

Please check out the related post Frank Guinta's Plan For America, which takes his job fair idea into other areas.

I have three problems with the job fairs Rep. Guinta endlessly touts: 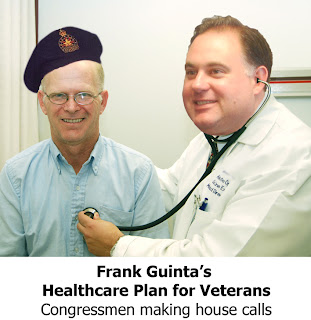 The rate of unemployment among vets is several points higher than the rate for the country as a whole.   It's a national disgrace.  But there's terrible gridlock in congress.   Nothing can get done.

Frank Guinta is on the case.  He's going to get those vets jobs if he has to find each one a job himself.  So he hosts job fair for vets.

There was this letter in the Concord Monitor on November 13, 2011 from a man who attended Rep. Guinta's event.  It's entitled "Useless job fair from Guinta."

I had the displeasure recently of attending U.S. Rep. Frank Guinta's job fair at the New Hampshire Community College in Manchester. My son, who is a U.S. Marine, and I traveled from the Monadnock Region to attend this job fair. We arrived just before 10 a.m.

Companies with applications were nowhere to be found, not a good thing for veteran job-seekers. They had a table with some snacks on it. There was a table set up for recruiting, a table set up for homeless veterans, a table with a Walmart representative who said Walmart would be sending holiday packages for the troops. A nice gesture in my opinion, but there weren't any job applications at this table. Another table was set up representing the American Legion and maybe one or two more tables geared toward military benefits.

It was a sorry excuse for wasting my gas money. I didn't see one representative from a company that had job applications. I suppose if you wanted to enlist or reenlist, then Guinta wouldn't have to worry so much about the state of the economy. My advice: Don't waste your gas.

Then there's this video on YouTube.    The description states:

Jack Cochrane did everything he could to get a job, before finally pleading to his Congressman for help. Frank Guinta promised 4 times to "personally help" Cochrane, then blew him off while Cochrane lost his home and his daughter.


I've been looking for a report that someone actually got a job at one of these fairs.   I couldn't find one.   No letter to the editor, no comment on a blog thanking Mr. Guinta for getting him a job.    If you find one, please leave a comment and I'll update this paragraph.

Well, you'd never know the Guinta job fairs were shams from the picture of the event: 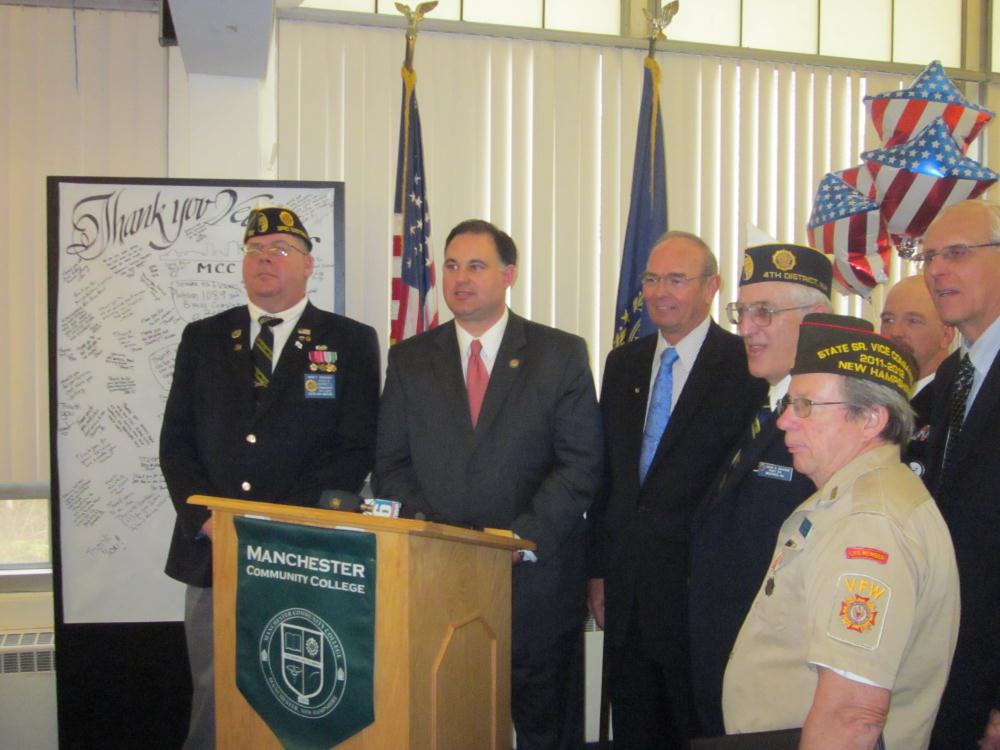 He got some log rolling the other day when veterans defending his record said:

He especially impressed us when he hosted a job fair specifically for military veterans to help put those who served back to work — something former Congresswoman Shea-Porter never did.

Of course, Carol Shea-Porter spent her time in her office passing actual laws to get veterans jobs and health care.

Guinta said the feedback he’s received from businesses has been largely positive, but ‘‘there are rules in terms of what I'm allowed to publicize once these people get a job,’’ he said. ‘‘There are privacy issues there.’’

In other words, Rep. Guinta failed to name a single person who got a job at one of his fairs.   You'd think at least one person would be grateful enough to give the congressman permission to use his name.

What did Mr. Guinta do with the pictures from this and similar events?   Here's a clue from the Concord Monitor story from 4/29/2012 entitled "Guinta spent most on mailings."    "Franking" is the word used to refer to taxpayer-funded mass mailings from congressman.

Guinta, who in 2010 criticized his Democratic opponent, then-Rep. Carol Shea-Porter, for her use of franked mailings, spent $164,649 on franked mail last year.


A 5/15/2012 USA Today story "House freshmen spent millions of tax dollars on mailings" had a higher estimate for the price tag.

When he ran for Congress two years ago, New Hampshire Republican Frank Guinta blasted Democratic incumbent Carol Shea-Porter's frankings as "propaganda," and described them as "campaigning with our tax dollars."

As a freshman, Guinta sent 469,013 mass mailings last year at a cost to taxpayers of $206,276, ranking him 21st among House members for money spent on franked mail. In one piece distributed in October, he told constituents that he "is working to improve the economy for your family."

469,013 mass mailings!   Impressive.    Note that Mr. Guinta is now attacking Shea-Porter for a typical $30,000 salary expense, which is dwarfed by his use of $200,000 in taxpayer funds to send what were essentially campaign materials.    By the way, Mr. Guinta attacked Shea-Porter for abusing her franking privilege for spending that turns out to be less that half of Mr. Guinta's total.

Mr. Guinta isn't doing the job the taxpayers hired him for

What bothers me the most is that we are paying Mr. Guinta to be our representative in the US congress.   He's supposed to be a legislator - a lawmaker.    But the supposed "jobs" bills that Mr. Guinta votes for seldom become laws.

Mr. Guinta provides us a list of his supposed jobs bills.    They're supposedly bipartisan as well.    Of the twenty eight bills he lists (oddly his literature says there are 30 or 40) four have been signed into law by the president:

H.R. 4 - Signed into law by the President on April 14, 2011
Summary from Thomas:
Comprehensive 1099 Taxpayer Protection and Repayment of Exchange Subsidy Overpayments Act of 2011 - Amends the Internal Revenue Code to: (1) repeal requirements for the reporting to the Internal Revenue Service (IRS) of payments of $600 or more to corporations that are not tax-exempt and of gross proceeds paid in consideration for any type of property; (2) repeal requirements for reporting payments made with respect to rental property which is not part of a trade or business; and (3) increase the limitation on recapture of excess advance payments of the tax credit for health insurance premiums.
3% Withholding Rule Repeal

So, of the 28 bills Mr. Guinta calls "jobs bills" that Mr. Guinta lists, only four passed, and only one of these is a bona-fide attempt to create jobs.   H.R. 647 looks like a nice bipartisan compromise: use federal dollars to boost private sector hiring of vets.

Frank, why aren't you working on more things like this?   It's truly bipartisan -- it passed a GOP dominated house and a Democratic senate and was signed by a Democratic president.    Don't you see how it's different than what you call "bipartisan" ?  You get one or two Democratic votes on a largely party line house bill, and call that bipartisan.   Of course the senate is not going to vote on any of your "bipartisan" bills.   You make no effort to work with the senate on a bill that could be passed in both chambers and signed by the president.

Frank, you're a legislator.   You're not job fair planner-in-chief.   Your job is to make laws.   To implement policy to solve our nation's problems.   If there's some shortage of job fairs that's keeping our people from working, your job is to pass laws to fix this.   Staging a few job fairs instead of passing laws is an abdication of your responsibility to your constituents.

Voting for "Disapproval of FCC's Net Neutrality Regulations" is not helping anyone get a job.  Even if it did get through congress, which it has no chance of.   Yet it's on your list of jobs bills.

Passing bills that will never be adopted by the senate is not making laws.   It's not really doing anything.

Frank, I saw somewhere in your literature that you were doing something about healthcare for veterans.   Promise me you haven't donned a stethoscope and started making house calls.

Posted by ORCSDcleanslate at Thursday, October 04, 2012