I'm going to load a bunch of Photoshop efforts I think may come up in the vice presidential debate tonight.    You may click on any picture to enlarge.

My guess on some things that Joe Biden might bring up:

First on the idea that Ryan Budget cures the deficit.  I already posted this one.   I'll just reproduce the picture that uses the debt figures from the bill itself. 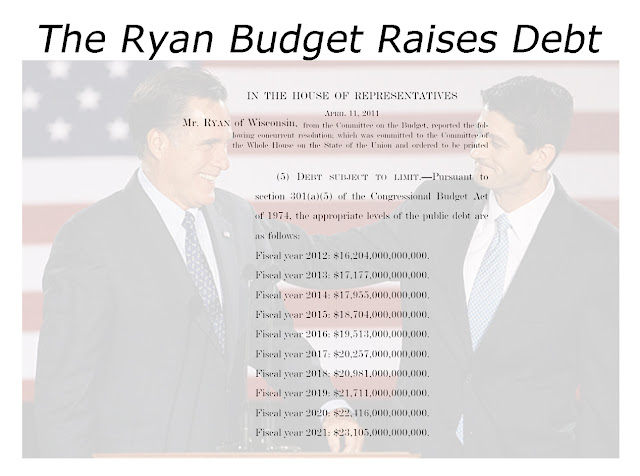 I think the main thing Biden should focus on in the Ryan budget is the Medicare "premium support."   I find the argument over the word "voucher" unproductive.   Call it "discounts on private insurance" maybe. 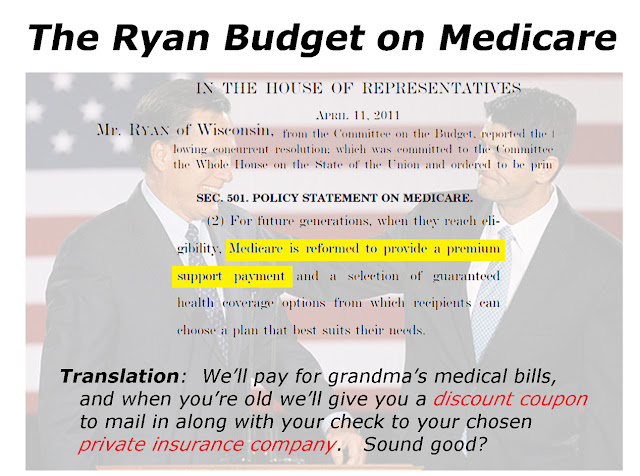 It's the folks 55 and under that will be directly effect by the Ryan Medicare plan.   The analogy with Groupon might help them to understand.

One might object that the picture below again refers to the first Ryan budget, passed by the House 4/15/11.  The GOP plan is closer to the second Ryan budget -- it gives you a choice yada yada yada.   In reply, I note that the first Ryan budget is still a live resolution.  It was passed by the current House of Representatives.  If the Senate felt like it they could pick it up and pass it today, at which time it would become a Concurrent Resolution of the United States Congress.   It is not ancient history.

One thing I don't think has been emphasized enough is the difference in the way Medicare costs are controlled under Obamacare and Ryan 1.   Obamacare genuinely controls overpayments to insurance companies and hospitals (the infamous $716 Billion) which extends 8 years the life of Medicare as it exists.   Ryan 1 throws up its hands at controlling escalating medical costs, instead changing to a system where medical cost increases that outpace inflation are borne by senior citizens.   In their mind it's off the government's books now, so problem solved! 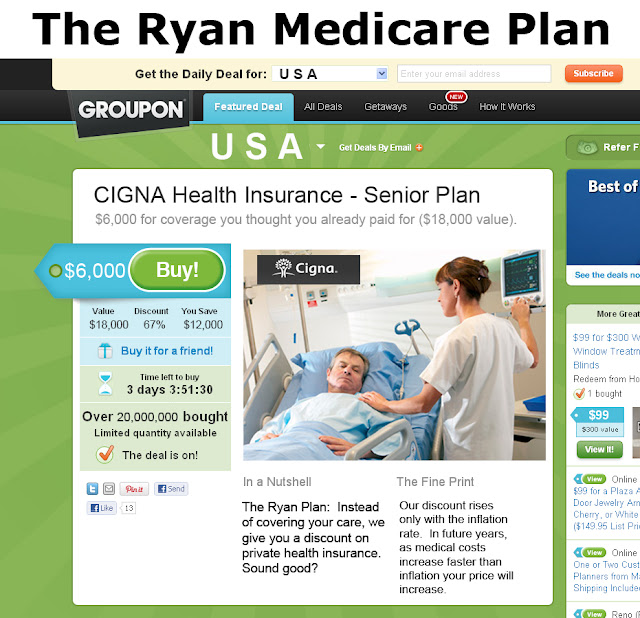 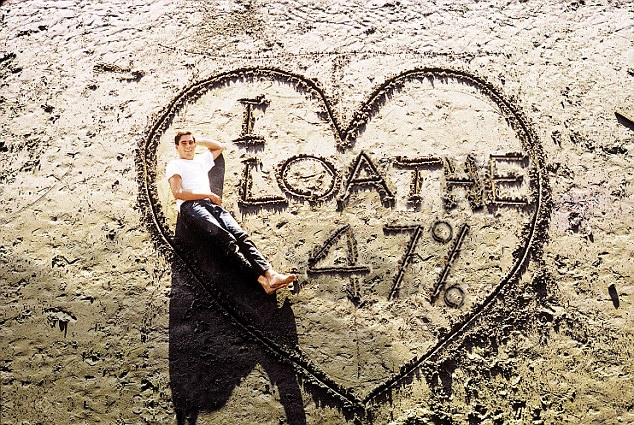 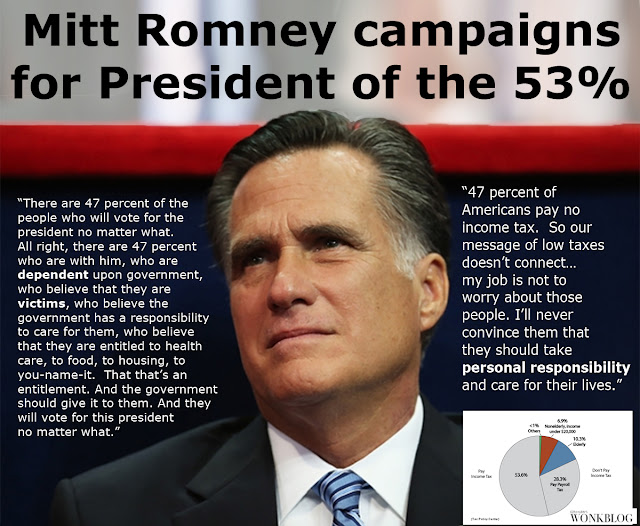 I think the Democrats see women's issues as a winner for them this time because the Republicans have gone so far extreme.   Paul Ryan has been pretty far right pro-lifer his whole career and I think may properly be tied to Todd Akin and other extreme Republicans.    Since, 2010 there have been so many states whose legislature and executive are Republican controlled, that promised to focus on economic issues but have enacted just a tremendous amount of anti-abortion legislation.   I have no reason to believe the same thing wouldn't happen on a national level. 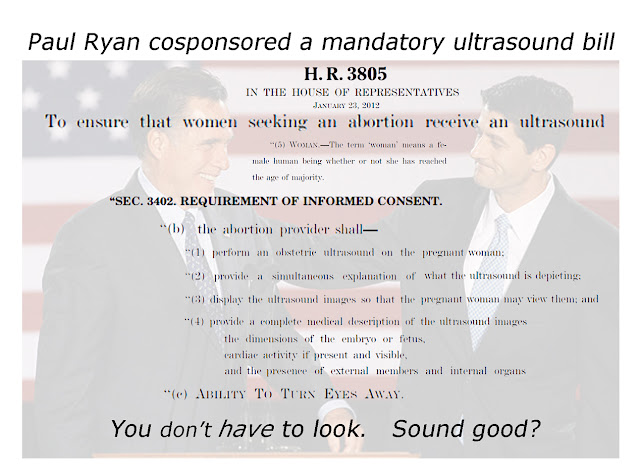 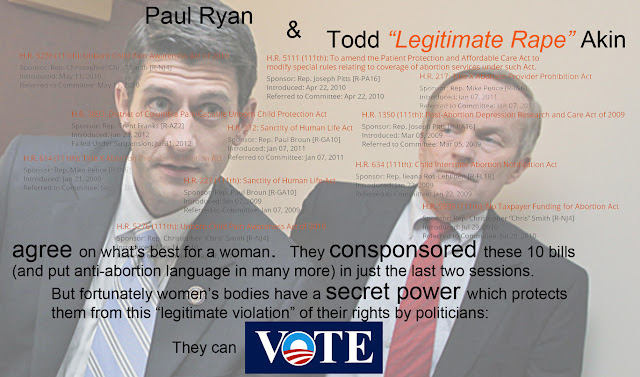 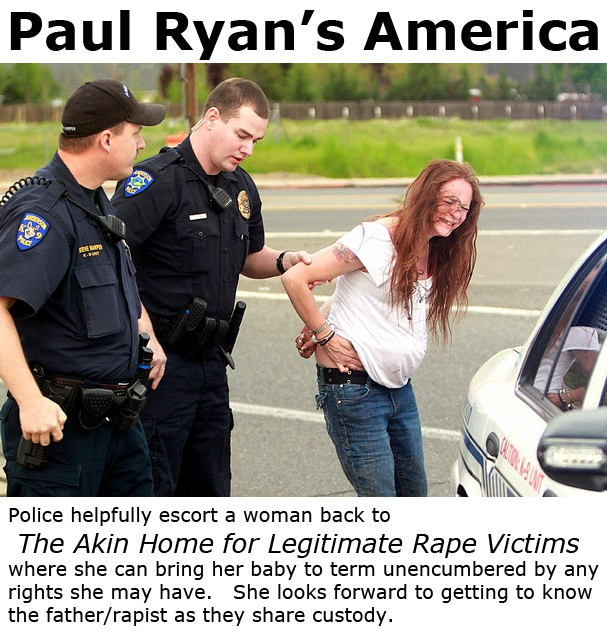 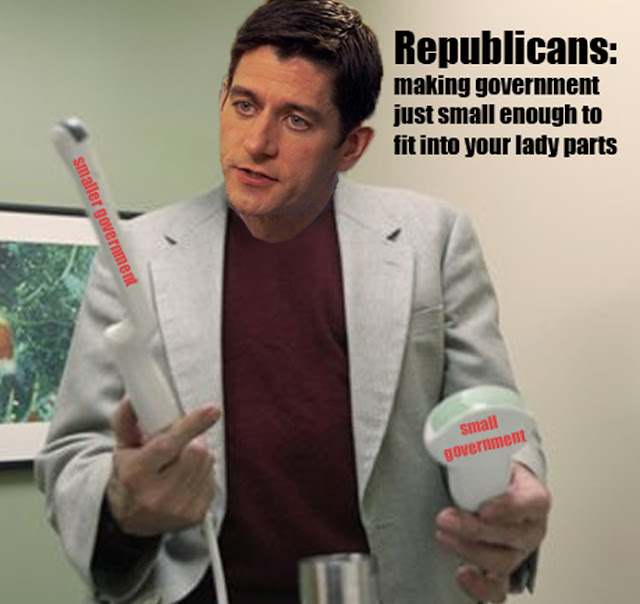 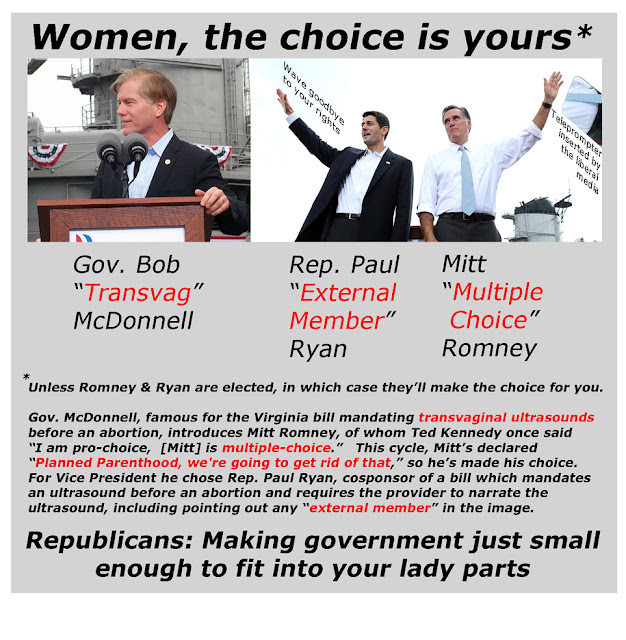 Here I try to focus on the age of the Supreme Court members and the very good chance the next president will appoint at least two Supreme Court Justices.   If Mitt can replace Ruth Bader Ginsburg with a Scalia as promised, Roe v Wade would soon be overturned 6-3. 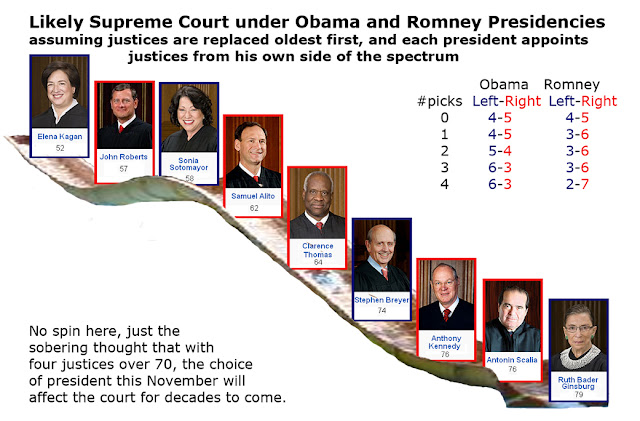 Next
Prev
Posted by ORCSDcleanslate at Thursday, October 11, 2012