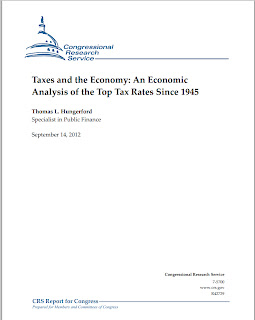 This is the conclusion of the Congressional Research Service report "Taxes and the Economy: An Economic Analysis of the Top Tax Rates Since 1945."   The CRS, often referred to as "congress's think tank" is the highly respected, non-partisan public policy research arm of the US Congress.

CRS reports are not generally made public.   Amid claims that Senate Minority Leader Mitch McConnell had moved to suppress the report, it appears to have been leaked in time for the election.

The report challenges the central dogma of Republican tax policy:  lowering the tax rate for businesses and individuals will improve the economy.   For example, Mitt Romney's plan is a 20% reduction in tax rates and a lowering corporate tax rates from 35% to 25%.

Most of the argument has been over if or how much limiting of deductions and exemptions could make up for the loss in revenue of the rate cut in Mitt's plan.   The CRS report ignores that, instead questioning the very idea that such a policy would lead to economic improvement.   Examining our history since 1945 suggests there's no reason to believe lowering rates will lead to increased GDP growth.   There's no reason to believe lowering rates would lead to increased savings or investment.

What there is evidence for is that lowering the tax rates leads to more inequality.   Instead of trickle-down, we get "pooling-up," where wealth gets concentrated in the hands of a small number of people.

In other words, one of the most respected sources of information in government, the Congressional Research Service, has concluded that the central tenet of the Republican's economic plan, tax cuts, especially for higher incomes, don't help the economy.   They just help rich people get richer.

The Republican response, as usual, has been to attack the source when they don't like the conclusion.   Never mind the damage to our society that comes when sources whose value is that they can be trusted to provide facts and analysis upon which to make governing decisions are derided for partisan purposes.

This was posted 5:18am  Saturday, November 3, 2012.   I changed the date so the list of October articles on the right stays up through election day.

Posted by ORCSDcleanslate at Saturday, November 03, 2012