I got this mailer in the mail a couple of days ago.   Here's the meat: 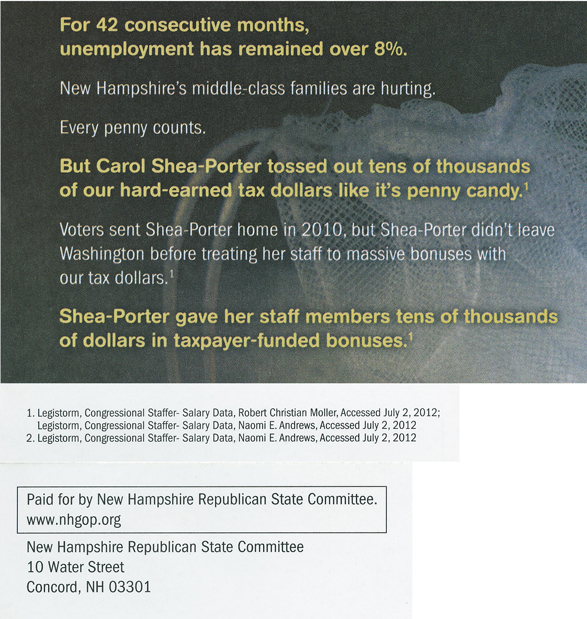 It's not directly from Rep. Guinta.  It's from his pals at the New Hampshire Republican State Committee.   Please correct me if I'm wrong, but I think that unlike with Super PACs or other outside organizations, there's no rule preventing Congressman Guinta from working with the Republican state committee on the content of their ads.   I think it's likely he approved this ad.

The mailer mentions 42 months of unemployment over 8%.   Of course it doesn't mention that the unemployment was caused during George Bush's term by the biggest financial crisis since the Great Depression.    And somehow it neglects to mention that Frank Guinta has been our representative for over half of those 42 months.    Actually, it doesn't mention Frank Guinta at all.   In fact it goes through some contortions to avoid mentioning Rep. Guinta, oddly asking people to "vote no on Carol Shea-Porter."

The mailer claims Carol Shea-Porter sent her staff home with "massive bonuses" at taxpayer expense.   It references Legistorm.  I thought I'd verify the claim.

Here's the data from Legistorm.   I compared Carol Shea-Porter to Paul Hodes, the district 2 NH rep who also lost in 2010.   Then I looked a list of all the house reps who lost in 2010, and looked up the first few (sorted by state) in Legistorm.   Here's the result.


I got "You have reached the limit of your free access allowed in a one-month period" from Legistorm.  I'm not going to pay $30 to add more lines to this table, so let's stop here.

It's very clear that Shea-Porter did not do anything unusual or outrageous with her staff pay after she was voted out of office.   She looks positively thrifty compared to some of these outgoing representatives.   Three of the eight others on this list spent more than four times as much on outgoing staff.   The mailer is misleadingly trying to make an issue of what appears to be perfectly reasonable behavior by outgoing Representative Shea-Porter.

Is this the really the best you can do, Frank?

I'll bet that Frank Guinta's final staff salary tab in 1Q13 exceeds Carol Shea-Porter's final tab.   But I'm not going to complain about it.  It will be worth the money to get Rep. Guinta out of that seat and Rep. Shea-Porter back in.


Posted by ORCSDcleanslate at Wednesday, October 03, 2012