I made this graphic in response to the new GOP attempt to win presidential elections by changing the rules of elections rather than putting forth candidates that a majority of people would care to vote for.

Congressional districts were successfully gerrymandered in the GOP's favor as a result of the fortuitous (for them) coinciding of the Tea Party landslide of 2010 with the 10 year cycle of the census-driven redistricting process.   In many of these states, the legislature has remained in Republican control (in no small part due to gerrymandering of state congressional districts.)

The way gerrymandering works is to concentrate Democrats in the smallest number of congressional districts, while leaving small but significant Republican majorities in the remaining districts.   Then, a Republican can most of the districts even with a substantial loss of the popular vote in the state.

Virginia, Michigan, Ohio, Wisconsin, Pennsylvania and Florida are have Republican-dominated state governments which are considering laws like this.   Had such laws been in effect in the last election, Mitt would have won most of these states, and thus the election.

It's a crazy system we have where the rules are different in different states.  Gerrymandering is a terribly problem, resulting in anti-democratic (small d) outcomes in many states.   It makes no sense to allow politicians to draw district lines, and it certainly is a terrible idea to change the rules in a partisan way so that states that tend to go Democratic (big D) have less impact. 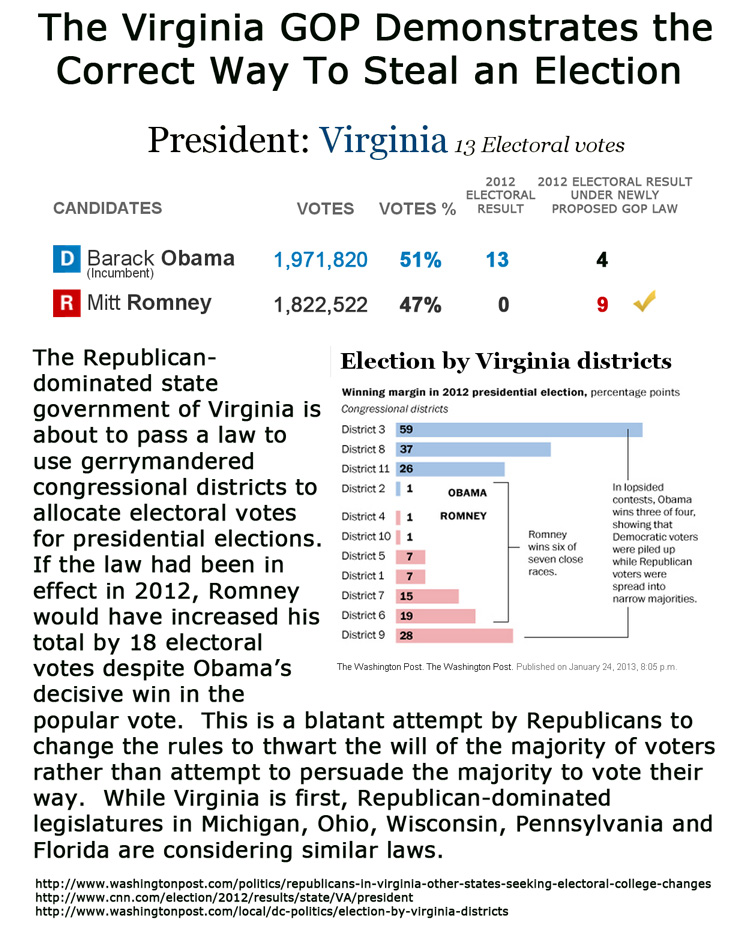 Posted by ORCSDcleanslate at Friday, January 25, 2013