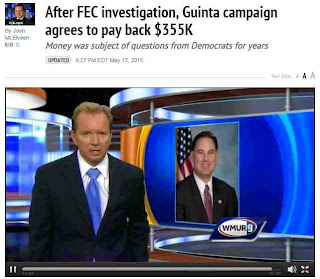 Except for the political fallout, the long saga of the $355,000 "loan" Rep. Guinta claims to have made to his own campaign is over. According to some great reporting by WMUR, Rep. Guinta has settled with the Federal Election Committee (FEC), agreeing to pay back the $355,000 and pay a $15,000 fine. Guinta's conciliation agreement with the FEC states, "Between June of 2009 and September of 2010, Guinta received $381,000 in the form of checks made payable to him, drawn from accounts held in Guinta's parents' names, to which Guinta contends he had an equitable interest."  The agreement further admits Guinta's campaign "accepted excessive contributions as a result in a violation [of FEC rules]."   At the time, election rules prevented each parent from donating more than $2,400 each per election (the primary and general count as separate elections).

The so-called "loan" was the topic of my first post.  In a nutshell, during his 2010 campaign for congress Rep. Guinta filed that he had loaned his own campaign between $250,000 and $500,000.   In July 2010 Nashua Telegraph reporter Kevin Landrigan pointed out that according to his past disclosure forms Rep. Guinta didn't actually have anywhere near that much money, raising the question of its true source.  In response, Rep. Guinta eventually amended past disclosures to include a previously undeclared account.

Rep. Guinta has already changed his story about the source of the money and the status of the FEC investigation several times.  He continues this trend with his new contention of "equitable interest" in his parents' account.  There's no limit on the amount of money his parents (or anyone) could legally give Frank the person as long as it's not intended to get him elected, so I'll predict that as yet untold story might come out of FG's mouth eventually.  Someone should ask Frank if his parents paid the federal gift tax they owe because they gave the money to Frank personally, not the campaign.

In that first post on October 1, 2012 I wrote, "Speculation on the true source of the money focused on Mr. Guinta's parents, who had sold a house for $800,000 just before the campaign began. "  This turned out to be correct, as Rep. Guinta has now admitted.  Former Rep. Carol Shea-Porter and the other Democrats turn out to have been right all along.  Guinta has long denied his parents were the source of the money, one of many outright lies.

Of course, rather than admitting wrongdoing outright, our weaselly representative has left himself some wiggle room with the claim of "equitable interest" in his parents' account.  Needless to say, he can't really have it both ways, not declaring this account all along but drawing on it for loans as needed.  In any case, with the conciliation agreement with the FEC Rep. Guinta has confirmed that he has indeed misled and at times outright lied about this money all along.  I look forward to him being replaced by a Democrat in 2016 or sooner.

Matt Murray at New Hampshire Labor News wrote a more in-depth report you might want to check out.
Posted by ORCSDcleanslate at Wednesday, May 13, 2015